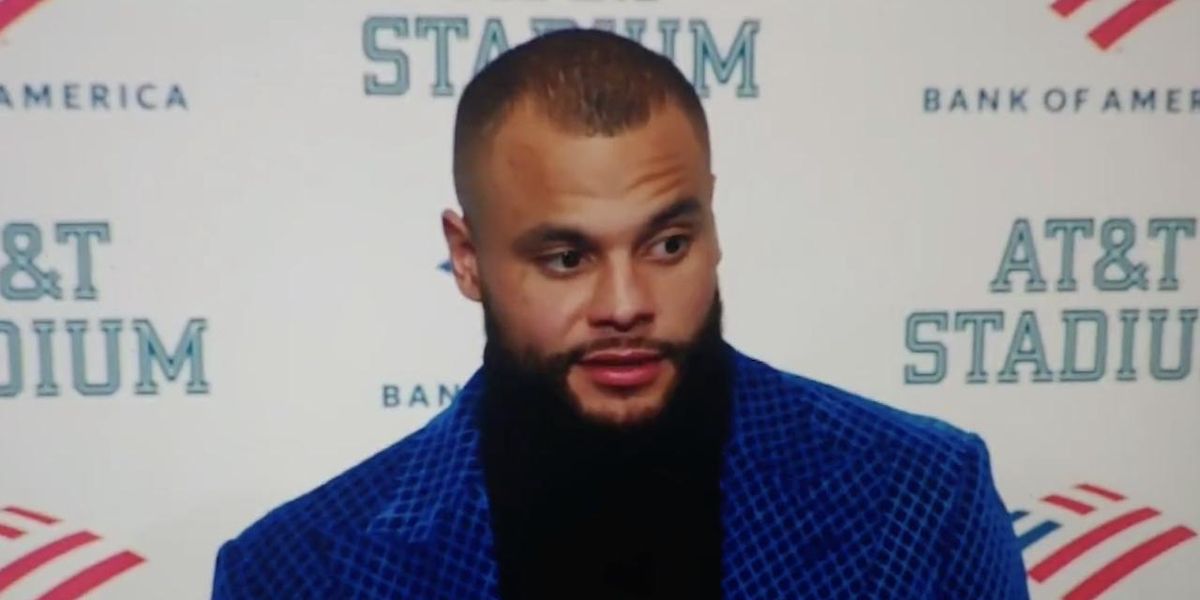 Dallas Cowboys quarterback Dak Prescott served up a big dose of poor sportsmanship — along with some of his team’s fans — after a down-to-the-wire wild-card playoff game loss Sunday to the hated San Francisco 49ers.

What did he say?

When asked at a postgame press conference about Cowboys fans at AT&T Stadium throwing trash on the field following their team’s 23-17 defeat, Prescott launched into a soliloquy about how he and his teammates give their heart and soul to the game and that such a reaction from fans toward players is “sad.”

Really classy of eagles fans to disguise as cowboys fans and throw trashpic.twitter.com/K7Ptm3ikhN

“I understand fans and the word ‘fan’ for fanatic, I get that, but to know everything that we put into this, day in and day out, try our hardest,” Prescott said. “Nobody comes into the game wanting or expecting to lose, and for people to react that way when you’re supposed to be a supporter and be with us through thick and thin, that’s tough.”

But when Prescott was informed that fans were throwing trash at the referees as they were leaving the field, the losing QB’s perspective changed dramatically.

“Credit to them then. Credit to them.”nnDak Prescott voiced support for fans who threw trash at referees Sunday #DallasCowboyspic.twitter.com/1jCAoZvQ3P

According to Michael Gehlken, Cowboys reporter for the Dallas Morning News, Prescott also said, “The fans felt the same way as us. I guess that’s why the refs took off and got out of there so fast. I think everybody is upset with the way this thing played out.”

Down by seven points with no timeouts and just 14 seconds remaining in the contest, Dallas appeared to have all the momentum and drove down to San Francisco’s 41-yard line.

On what would ultimately be the final play, Dallas quarterback Dak Prescott shockingly ran the ball instead of throwing it to a receiver who might scamper out of bounds and stop the clock, giving Dallas a reasonable final shot at the end zone.

Prescott’s run netted the Cowboys another 17 yards, but seconds kept ticking away. Each team had to get set, and the ball had to be spotted so Prescott could spike it and stop the clock.

And with about six seconds left, Prescott got up after his run and handed the ball to his center, who then placed the pigskin on the turf.

Problem is, an official is supposed to spot the ball.

Umpire Ramon George ran up behind Prescott and the Dallas line, made bodily contact with them as he squeezed his way through, then placed the football a yard or two backward — all as precious seconds ticked away.

But by the time the ball was snapped, the clock had run out. And it was yet another heartbreaking Dallas playoff loss.

According to Field Yates, an NFL Insider for ESPN, the Cowboys have now made 11 straight playoff appearances without reaching a conference championship game, which is the longest streak by any team in NFL history.

“He collided with the players as he was setting the ball because he was moving it to the proper spot,” Kemp added, the sports network said.

What else was said about the officiating?

“When we were younger, we just said it was bias, you know, people just hate the Cowboys,” rookie Dallas linebacker Micah Parsons said, according to the sports network. “I just think we were playing hard, you know. I think when you tend to play hard and you want to make a play, you tend to jump offsides, or you tend to put a hands to the face, or you know you might hold by accident, or even if it wasn’t a hold you never know how they might perceive it. I just felt like a couple of [the penalties] were very questionable and very bias[ed] towards us. But then again, it’s our fault, we shouldn’t be put in that position. I’m going to take full accountability, and I hope everyone else does, too.”

The Cowboys’ flamboyant owner and general manager Jerry Jones added to ESPN that his team “shouldn’t have been in position for that last play to be something controversial. So I’m not going to make it something bigger than it is.”

What was said about Prescott’s ‘credit to them’ comment?

As you might guess, not everyone on Twitter was in line with Prescott praising Cowboys fans for throwing trash at referees after the game:

This Race War Is Brought to You by CNN, Not Tucker Carlson
Here’s what BASED intellectual Jordan Peterson got wrong about Yumi Nu
Poll Shows 80% of the People in Hong Kong Want to Leave – Corresponding with China’s Takeover
Dinesh D’Souza Announces “2000 Mules” Returns to US Theaters for Typical Release on Friday
NYT Smears GOP as White Supremacist, Won’t ID Black Suspect in Anti-Asian Hate Crime