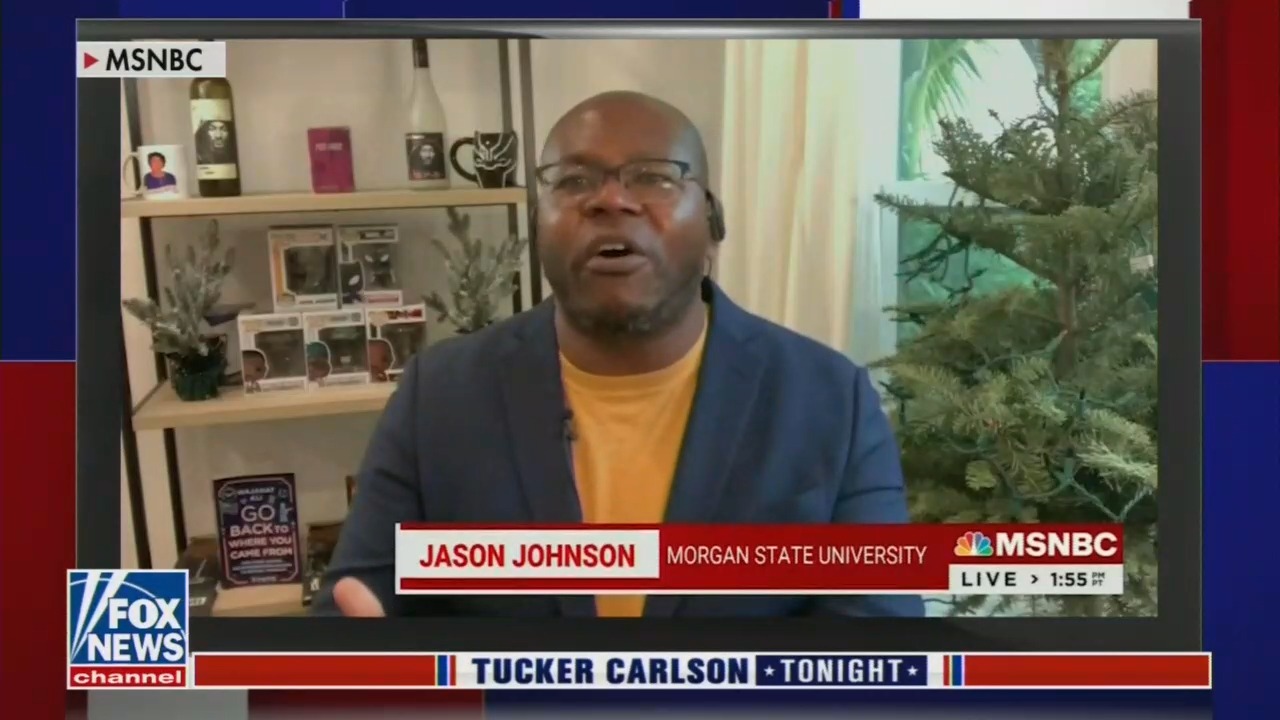 In his Friday monologue, Fox News star Tucker Carlson took after MSNBC contributor Jason Johnson calling the Republican Party a “dimestore front for a terrorist movement.” It was part of a commentary about how the Democrats are exploiting the January 6 riot as a midterm election strategy. “So the whole point of this exercise is to redefine any opposition to the Democratic Party as domestic terrorism as they face defeat in the midterm elections. Some Democrats are just saying that out loud.”

Carlson avoided the promotional hilarity on the Baltimore professor’s website: “Fresh, unflappable, objective, he is known for his ability to break down stories with wit and candor.” This is what Mr. Objective said on Thursday’s Deadline White House:

“Objective” professor Jason Johnson tells Nicolle Wallace on MSNBC that the Republican Party is a terrorist front like the PLO is for Hamas.

(Hamas gets gentler treatment on MSNBC than the GOP.) pic.twitter.com/MwF4EglNCD

JASON JOHNSON: We don’t know if Trump’s going to be on the ballot. If Trump is on the ballot on 2024, it’s the easiest thing in the world for Democrats because you can always run against the bad guy.

But I think the bigger, more dangerous thing, and I’ve been saying this for a while, I’m working hard to never say Republican Party again because they’re not a party. They’re Sinn Fein to the IRA, they are the PLO to Hamas. They are a dimestore front for a terrorist movement.

They didn’t have a policy in 2020 except loyalty to Trump. They just announced in The New York Times today, I think I saw the article where they’re asking their 2024 nominees to not engage in presidential debates. They’re no longer a party.

No one expects the “independent fact-checkers” to point out that the Republican Party is not actually a terrorist front. Tucker Carlson replied:

A front for a terrorist movement. Do they really mean what they say? Who knows if they mean it? They’re acting like it. And that’s the problem.

So how did the rest of us respond as the U.S. government redefines people who disagree with their political beliefs as terrorists? Well, there’s really only one way, and it’s a nonviolent way. It’s the essential way. Refuse to play along. Don’t pretend they’re sincere. They’re not sincere. Tell the truth. Call authoritarianism what it is. Preferably with a middle finger extended.