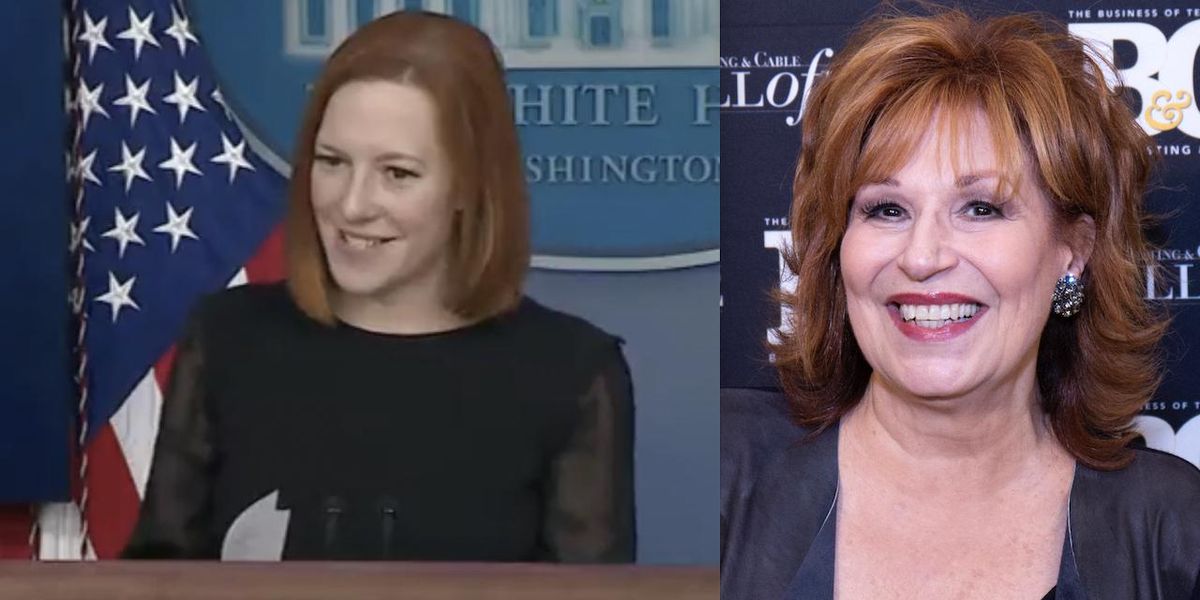 After the Republican National Committee on Thursday threatened the Commission on Presidential Debates that it would “prohibit future GOP nominees from participating in future CPD-sponsored debates” over what the RNC sees as unfairness and bias against Republicans, leftists predictably lashed out.

Republicans can’t win a fair fight and they know it. Regardless of the RNCu2019s tantrum, voters can count on hearing from President Biden and Vice President Harris who are proud of their records.https://www.nytimes.com/2022/01/13/us/politics/presidential-debates-rnc.htmlu00a0u2026

Joy Behar — loyal leftist co-host of “The View” — asked in a tweet, “Are they afraid that their candidates can’t keep up?”

White House Press Secretary Jen Psaki — when asked for a reaction to the news — quipped that “it’s a question best posed to the RNC on what they’re so afraid of”:

u201cItu2019s a question best posed to the RNC on what theyu2019re so afraid of.u201dnnu2014 WH Press Sec. Jen Psaki on RNC threatening to prohibit GOP presidential candidates from participating in debates sponsored by the non-profit commission that has hosted the debates for three decades.pic.twitter.com/tS2Mk3vIzn

BREAKING: The RNC says it will require all presidential candidates to pledge to NOT participate in any debates run by the Commission on Presidential Debates, breaking a decades-long tradition.nnWho agrees these Republican cowards FEAR THE TRUTH?

The RNC wants to stop all Republican candidates from participating in presidential debates because they donu2019t want to answer critical questions.

New York University journalism professor Jay Rosen surmised that the GOP “wants out” of “a common world of fact, about which candidates for president can be questioned”:

Ominous sign. The debates are full of problems and quadrennially a disappointment, but they do carry forward one key idea: there exists a common world of fact, about which candidates for president can be questioned. The RNC wants out of that.https://twitter.com/nytimes/status/1481665661139140616u00a0u2026

Columnist Tim O’Brien tweeted that the RNC’s move is “another example of Republicans’ antipathy toward public institutions and civic processes leading them to just…walk away. Doesn’t bode well for accountability or transparency”:

Another example of Republicansu2019 antipathy toward public institutions and civic processes leading them to justu2026walk away. Doesnu2019t bode well for accountability or transparency.https://twitter.com/maggienyt/status/1481665695322681350u00a0u2026

Comedian Titus attempted to summarize the RNC’s stance like so: “Alright guys, our candidates can’t form complete sentences, answer questions or think on their feet, so instead of finding good candidates, let’s refuse to let the morons speak, cool?”

u201cAlright guys, our candidates canu2019t form complete sentences, answer questions or think on their feet, so instead of finding good candidates, letu2019s refuse to let the morons speak, cool?u201dnRNC Signals a Pullout From Presidential Debates – The New York Timeshttps://www.nytimes.com/2022/01/13/us/politics/presidential-debates-rnc.htmlu00a0u2026

Writer Molly Jong-Fast said the RNC’s decision “makes me think the GOP is doubling down on its anti-democratic instincts”:

The RNC deciding it wonu2019t do debates anymore makes me think the gop is doubling down on its anti-democratic instincts.

Wow. nnThe RNC is going to require that presidential candidates pledge to not participate in presidential debates.nnThe GOP is fully withdrawing from democracy.https://www.nytimes.com/2022/01/13/us/politics/republican-presidential-debate-dispute.html?referringSource=articleShareu00a0u2026

RNC Chairwoman Ronna McDaniel tweeted in regard to her letter to the Commission on Presidential Debates said that “for years” the organization that’s supposed to be nonpartisan “has shown bias against Republicans. Since they continue to stonewall commonsense reforms, the RNC is leveling the playing field to make debates fair for future nominees.”

Among the reforms the RNC wants:

In the 2020 debates between then-Democratic nominee Joe Biden and then-President Donald Trump, it would seem that the moderators made more headlines than they should have.

In the first debate, moderator Chris Wallace of Fox News asked Trump to condemn “white supremacists and right-wing militia” even though Trump had done so repeatedly and even vowed the week before to designate the Ku Klux Klan as a terrorist organization. However, Wallace didn’t ask Biden to condemn Antifa — and Biden, in fact, actually claimed during the debate that the violent leftist group is “an idea, not an organization.” Interestingly, Wallace announced last month his departure from Fox News to join CNN.

The CPD tapped Steve Scully — then-political editor for C-SPAN — to moderate the second Trump-Biden debate, but it was soon reported that Scully had served as an intern for then-Sen. Joe Biden in college and later worked on the late Democratic Sen. Ted Kennedy’s staff. What’s more, C-SPAN suspended Scully after he admitted he lied about his Twitter feed being hacked in regard to a question he posted to former Trump aide Anthony Scaramucci after Trump accused Scully of being a “nevertrumper.” Soon the second debate was canceled after Trump complained about the format being changed to a virtual event due to the coronavirus pandemic.

And despite a report that the third debate moderator, Kristen Welker — chief White House correspondent for NBC News — has deep ties to the Democratic Party, she won high praise from both sides of the aisle for her job moderating the third debate.