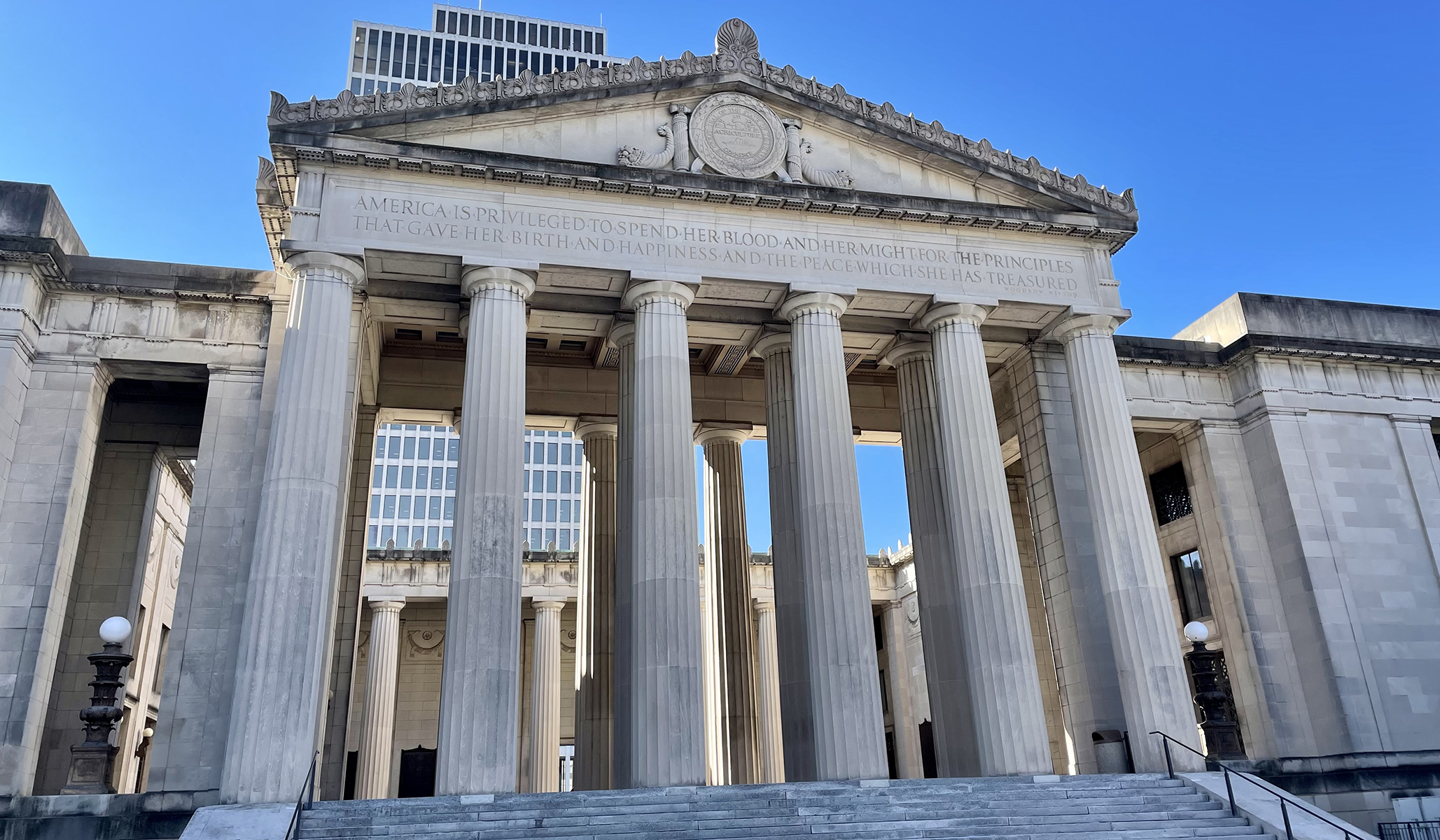 A couple of links for you: to a Nashville journal, on the homepage today; and to the latest episode of Music for a While, my music podcast. This ’cast begins with Vivaldi and ends with Leroy Anderson’s Sleigh Ride, somehow. An eclectic and I think interesting program of music.

The Nashville journal contains all sorts of observations and photos — relating to music, food, sports, and other things. Those other things include war memorials, of which Nashville has some impressive ones.

In my journal, I mention the city’s World War I memorial. I quote the words of Woodrow Wilson, inscribed at the top — words that would make many people gag or burn or revolt: “America is privileged to spend her blood and her might for the principles that gave her birth and happiness and the peace which she has treasured.”

Those words come from the end of Wilson’s famous war message, delivered to Congress on April 2, 1917. The speech, today and always, makes for interesting reading. Find it here. There is grist for today’s mill, and the mills of many, many days. It is important, too, to remember context: time, place, circumstance, all of it.

I also quote the words at the base of Nashville’s Korean War memorial. They read as follows: “Where Communistic Military Aggression Was Defeated.” What do you think of that? Are they true? Partially true? How about the cause? “Noble” (as Reagan described our cause in Vietnam, to the outrage of many)?

Nashville’s Vietnam memorial describes that war as “America’s longest war” — but there would come a longer war, of course. There is duly a monument to “Operation Enduring Freedom.” It quotes President George W. Bush: “We will not waver; we will not tire; we will not falter; and we will not fail. Peace and freedom will prevail.”

Those words come from the speech that Bush delivered to the nation on October 7, 2001, about four weeks after the 9/11 attacks. We had just launched our first strikes against al-Qaeda and the Taliban. It may be hard to remember the atmosphere of the time. It is also hard, I find, to convey that atmosphere to the young — for whom 9/11, the War on Terror, and all that is distant history.

Bush’s memoir Decision Points is instructive on these matters. Bill Clinton commended the book, in interesting fashion: It “gives readers a good sense of what it’s like to be president, to take the responsibilities of the office seriously, do what you think is right, and let history be the judge.”

Nashville has a monument to “Operation Iraqi Freedom.” It quotes General Tommy Franks: “We will liberate the Iraqi people from a dictator who uses torture, murder, hunger and terror as tools of oppression.” There is also a monument to to “Operations Desert Shield and Desert Storm,” a.k.a. the “Gulf War.” This one quotes General Norman Schwarzkopf: “It doesn’t take a hero to order men into battle. It takes a hero to be one of those men who goes into battle.”

Bill Buckley would point out that the words ought to be “who go into battle” (because the verb goes with “men,” not “one”) — but what the hell.

One more issue, maybe, before I leave this Corner post. In my journal, I discuss Edward W. Carmack, a Tennessee politician and newspaperman, who lived from 1858 to 1908. He was a defender of lynching. He was an ardent foe of Ida B. Wells, the civil-rights pioneer. He incited a mob against her (“Get the black wench”). When the mob showed up, as I note in my journal, she was out of town, and her life was spared.

There has long been a statue of Carmack in front of the Tennessee state capitol. It was torn down during George Floyd protests, and associated riots, in the summer of 2020. The statue will be repaired and reinstated (according to news reports on the subject).

In addition to the other things he was, Carmack was a great proponent of Prohibition. At the back of the monument, the Tennessee Woman’s Christian Temperance Union installed a plaque. On it is the text of Carmack’s “Pledge to the South,” which does not relate to Prohibition, but which sings of a disposition.

The South is a land that has known sorrows; it is a land that has broken the ashen crust and moistened it with tears; a land scarred and riven by the plowshare of war and billowed with the graves of her dead; but a land of legend, a land of song, a land of hallowed and heroic memories. To that land every drop of my blood, every fibre of my being, every pulsation of my heart, is consecrated forever. I was born of her womb; I was nurtured at her breast; and when my last hour shall come, I pray God that I may be pillowed upon her bosom and rocked to sleep within her tender and encircling arms.

Again, for my Nashville journal — a motley assemblage — go here.