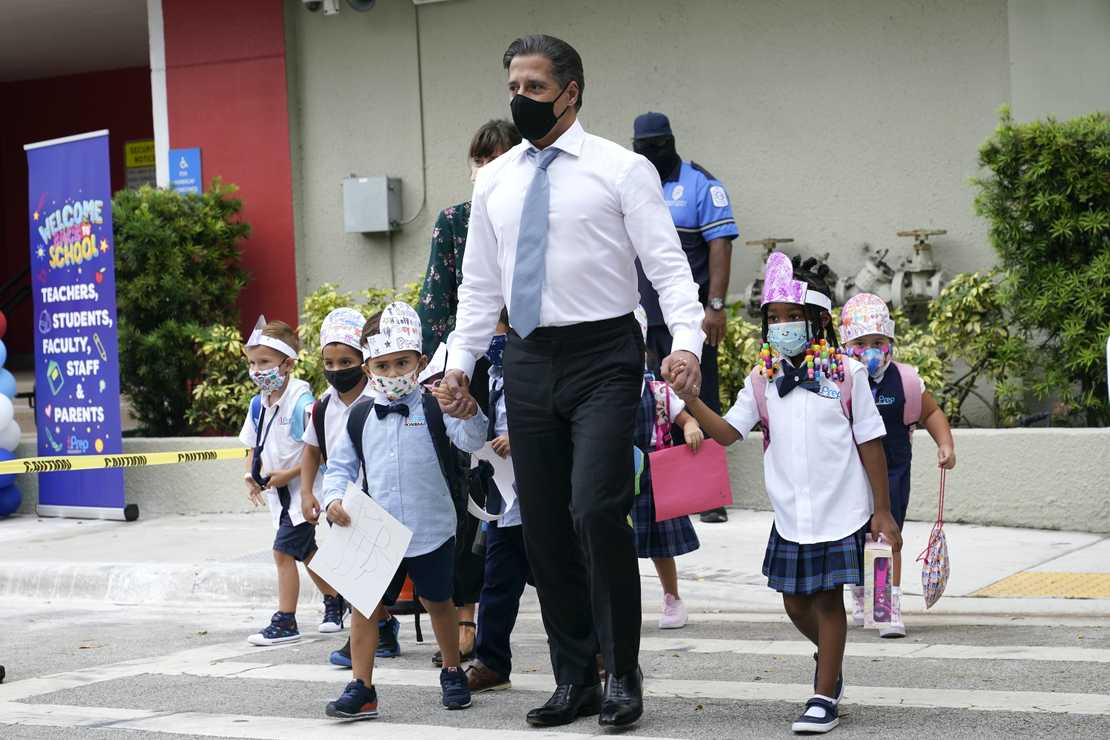 In the 1950s, the Office for Social Science Programs, Air Force Personnel and Training Research Center, Air Research and Development Command at MaxwelI Air Force Base conducted a study. The purpose was to define the tools used by the Korean military on prisoners of war (POWs) and develop ways to train members of the military to resist them. When you compare them to the primary features of the COVID-19 pandemic response, the findings are chilling.

Albert D. Biderman, a social scientist, spent several years interviewing the Ari Force POWs who were returned by the Chinese after the South Korean armistice. About half of them had experience with Communist attempts to coerce false confessions. He found that the techniques were already well known and the same ones used by groups trying to oppress, gain compliance from, or rule another group. He noted it in his report:

The reception of these findings has frequently been incredulous and we have been asked: “Is there nothing more to it than this? Can people really be manipulated so easily? Are you sure there was not something done that you failed to detect?”

Biderman boiled the actions down to eight basic steps that did not include physical torture. He specifically noted that the actions were rarely effective. I have taken the eight elements that Biderman titled “Communist Coercive Methods for Eliciting Individual Compliance” and substituted pandemic responses in the column where Biderman placed the techniques used by the Communists. There is a more than decent case to be made that our national leaders incorporated all of them. Some state and local leaders followed suit. 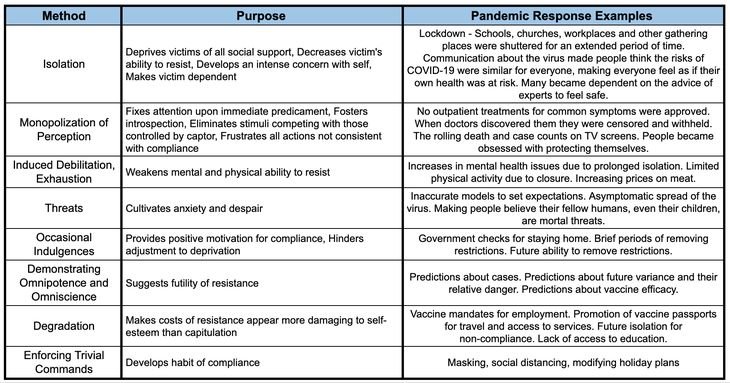 It is easy to quibble about where each element of the pandemic response fits, but they all belong in one of the boxes. This chart hit a significant chord with me because almost every response to the pandemic has turned all conventional public health teaching on its head. Many of us lived through H1N1. The uncertainty about that virus was every bit as high as it was around COVID-19, and it was more lethal for children.

During that time, I was responsible for workplace health and safety. I received no communications from my local department of health regarding any increased precautions. I traveled for work as usual with no masking requirement. My kids went to school and all of their activities. And the one person who suggested any modifications to normal behavior at all, Vice President Joe Biden, immediately put out a clarifying statement reversing himself. There was no quarantine for the healthy and certainly no masking or social distancing.

Recommended: Yellen, Biden Are Coming After Your IRA Next

The obvious difference between H1N1 and COVID-19 is President Donald Trump. I believed it was all political because the economy was Trump’s best argument for reelection. Take that away, and it became more about style than substance. The Democrats’ only plausible candidate for a national election was Joe Biden. Of course, limiting his exposure to voters was also necessary to conceal the apparent cognitive decline that everyone on the world stage sees now.

When he presented his findings, Biderman noted that employing the tactics for eliciting a false confession was aimed at full compliance. A successful attempt meant the soldier confessed, acted as if he had done the crime, and felt remorse. The only substantive difference in the outcome, whether or not they obtained a confession, was the behavior of the POW. Again, I have taken his descriptions and described behaviors related to the pandemic.

Biderman also noted that jailers and tyrants could use the tactics to shape many different outcomes. If vaccines are the trial balloon, the governments pushing them seek to identify defensively, actively, and completely compliant people. The defensively compliant people will fall into the category above and begin to resist or become actively compliant. In a world of declining vaccine efficacy and low severe illness and death rates among people under 40 and those who have recovered, what is the point?

You can assume more is coming. Already, Treasury Secretary Janet Yellen is telling Americans that the IRS will be snooping in their bank accounts and that they will tax money investors have not even received. The administration is telling Americans the shortages of essential goods and rising prices are signs of a robust economy. The corporate media is telling parents not to believe their own eyes and ears about the K-12 curriculum. The only step too far to date is classifying parents who object to classroom content and COVID restrictions as domestic terrorists.

If you still don’t believe governments in Westen nations aren’t training citizens like so many lab rats using rudimentary behavior modification techniques for something bigger, listen to their media mouthpieces. In the last week, Axios told Americans to give up meat for Gaia, NBC proposed we stop driving cars to stay safe, and the Guardian tried to convince you that China will go green in 2060. Then ABC put Dr. Fauci on television to say there is nothing to see related to gain-of-function research in the Wuhan lab.

Bill Gates warned us what is next. On his personal blog, he wrote, “If we learn the lessons of COVID-19, we can approach climate change more informed about the consequences of inaction.” Have you learned your lessons, comrade? Because they expect you to comply.