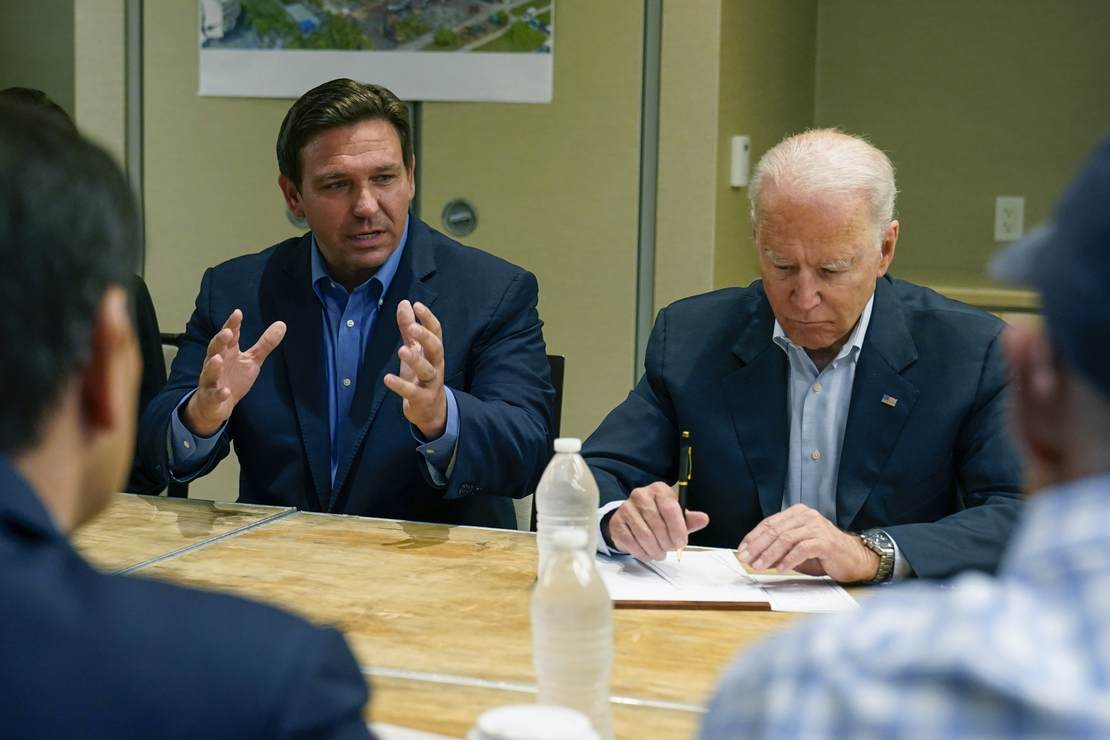 Donald Trump might be the runaway favorite choice of GOP voters for 2024, but Ron DeSantis is clearly positioning himself for a future presidential run, and he’s getting a lot of help from Joe Biden.

When asked about Biden’s latest cheap shot during the press conference about his planned vaccine mandate, DeSantis slammed Biden.

“Well I would just say generally when you’re taking action that’s unconstitutional, that threatens the jobs of the people in my state, many, many thousands of jobs, I’m standing for them,” DeSantis said. “We’re going to protect their jobs against federal overreach. This is a guy who criticizes the state of Florida for protecting parents’ rights. He says school boards should be able to eliminate parents’ rights and force five-year-old kids to wear masks all day. That’s what he thinks is appropriate government. Yet, here he comes from Washington, D.C. instituting an unprecedented mandate, which even his own people have acknowledged in the past is not constitutional. That’s not leadership.”

RELATED: DeSantis Blasts Biden: ‘I Don’t Wanna Hear a Blip About COVID From You’

DeSantis was referring to Biden’s chief of staff Ron Klain retweeting NBC’s Stephanie Ruhle’s suggested constitutional workaround to a federal vaccine mandate—a concession that such a move is unconstitutional.

But, DeSantis wasn’t done with Biden.

“And I think the problem I have with Joe Biden, more than anything, this guy doesn’t take responsibility for anything. He’s always trying to blame other people, blame other states,” he pointed out. “This is a guy that promised when he ran for president, that he would shut down the virus. If you look now there’s 300% more cases in this country today than a year ago when we had no vaccines at all. So his policies are not working.”

DeSantis also pointed out that the mandate, in addition to being unconstitutional, would be “very destructive for the livelihoods of many, many Americans.”

NEW – Florida Gov. DeSantis says Biden’s vaccine mandates are “not based on science” and “will ultimately lose in court”.pic.twitter.com/qmFzMiehSa

If Joe Biden thinks attacking DeSantis will somehow stop the momentum of DeSantis’s presidential aspirations, he’s only kidding himself. DeSantis has managed to emerge from each attack stronger than ever, and he’s fully embraced the national stage Biden seems determined to thrust him upon. This summer, DeSantis launched some epic campaign merch with the slogan “Don’t Fauci My Florida.” I’m not even a Florida resident, and I want some of that!

Joe Biden’s vaccine mandate has also set up a confrontation between him and GOP governors, including DeSantis, that Biden is very much likely to lose, which only gives DeSantis more opportunity to prove his presidential bona fides. Biden might be more concerned about distracting the public from his Afghanistan disaster, but he might be losing the long game for the Democratic Party by giving DeSantis another high-profile victory in their ongoing duel.

For sure Joe Biden would argue that things are not going in well in Florida right now, but Florida’s COVID death rate is still much better than New York’s… Remember when Joe Biden called Cuomo’s COVID leadership the gold standard? Does Biden really want to go there with Ron DeSantis? I don’t think so. This is not a battle Biden can win. DeSantis has gotten the best of Biden each time. But, as long Joe Biden makes his foolish attacks, he helps DeSantis… heck he’s practically campaigning for him.

Rolling Stones Go Woke, Retire One of Their Biggest Hits from Concert Playlist
TikTok person wants to control speech by removing another word from English language
Here’s What Americans Are Saying About the Outcome of the 2020 Election
New Hunter Biden revelation undermines president’s comments: Turley
Prestigious DC school drafts policy to expel students over ‘misplaced humor,’ among other ‘harmful’ language