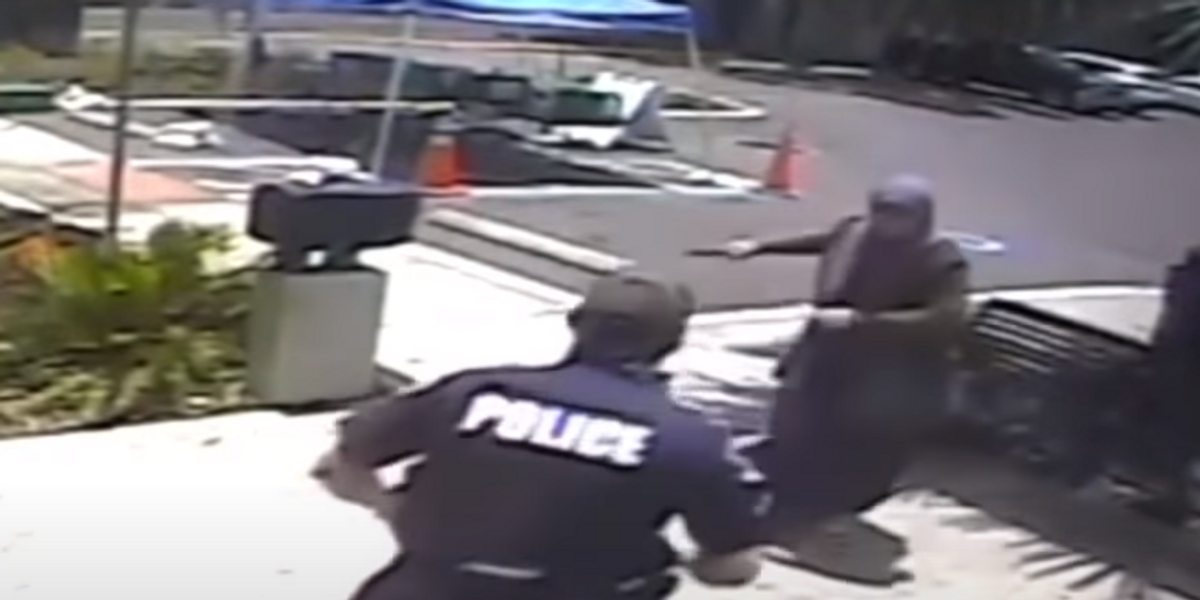 Following the nationwide protests over the deaths of George Floyd and Breonna Taylor, there is a laser focus on civilians who lost their lives in encounters with law enforcement. There was a police shooting this week where a woman died after she attacked a cop with a knife. In a strange twist, the Florida woman was the sister of a man who was arrested this week after allegedly planning terror attacks in the Tampa area.

On Friday, a woman was sitting at a bench outside the City Hall of Temple Terrace, a town next to Tampa. Surveillance video shows a Temple Terrace Police officer approach the woman, and she springs up and swipes at him with a knife. She lunges at him a second time, and the officer retreats, but she pursues him.

The woman and the man left the field of view of the surveillance camera. A second Temple Terrace Police officer appears in the frame of the camera, and he seems to be wielding a handgun.

The woman, identified as 22-year-old Heba Momtaz Al-Azhari, was shot by police and later died at the hospital. The officer sustained non-life-threatening injuries during the attack.

Temple Terrace Police Chief Kenneth Albano said that he was in his third-floor office and heard the officer command the woman to drop the knife numerous times.

The deadly encounter is under investigation.

“It’s a very traumatic thing for an officer to pull his weapon and much less take a life,” Albano said of the lethal incident.

Spectrum Bay News 9 reported that Al-Azhari is the sister of a man who was accused of plotting acts of terrorism this week. The Department of Justice announced on Wednesday that they had charged Muhammed Momtaz Al-Azhari, 23, with “attempting to provide material support or resources to a designated foreign terrorist organization, namely, the Islamic State of Iraq and al-Sham (ISIS).”

Muhammed Momtaz Al-Azhari was allegedly plotting terrorist attacks in the Tampa Bay area, including one on Honeymoon Island, a popular beach park.

The terror attacks were foiled by the FBI’s Joint Terrorism Task Force, as well as local police departments and sheriff’s offices. The suspect, who allegedly has a criminal history that includes prior terrorism charges in Saudi Arabia, attempted to purchase multiple firearms during the investigation before “acquiring a Glock pistol and a silencer.”

“He also expressed admiration for Pulse nightclub shooter Omar Mateen and spoke of his desire to carry out a similar mass casualty shooting,” the DOJ statement read. “Additionally, Al-Azhari researched and scouted potential targets in the Tampa area, including Honeymoon Island. He also rehearsed portions of an attack and the statements that he would make during or in connection with such an attack.”

“We are grateful for the hard work and swift action by our law enforcement partners and concerned citizens during this investigation,” U.S. Attorney Maria Chapa Lopez for the Middle District of Florida said. “Their coordination and cooperation in this matter allowed us to interrupt a serious threat, without harm to anyone.”

“We are grateful for the quick work of our partners at the FBI to apprehend Al-Azhari before he could carry out his attack,” Assistant Attorney General for National Security John C. Demers said. “This case demonstrates the Department’s commitment to stand vigilant against the threat of terrorism and violent extremism in all its forms.”

FBI agents arrested the suspect on May 24. If convicted, Muhammed Momtaz Al-Azhari faces a maximum penalty of 20 years in federal prison.

A family spokesperson said Heba Momtaz Al-Azhari was upset over her brother’s arrest earlier this week.